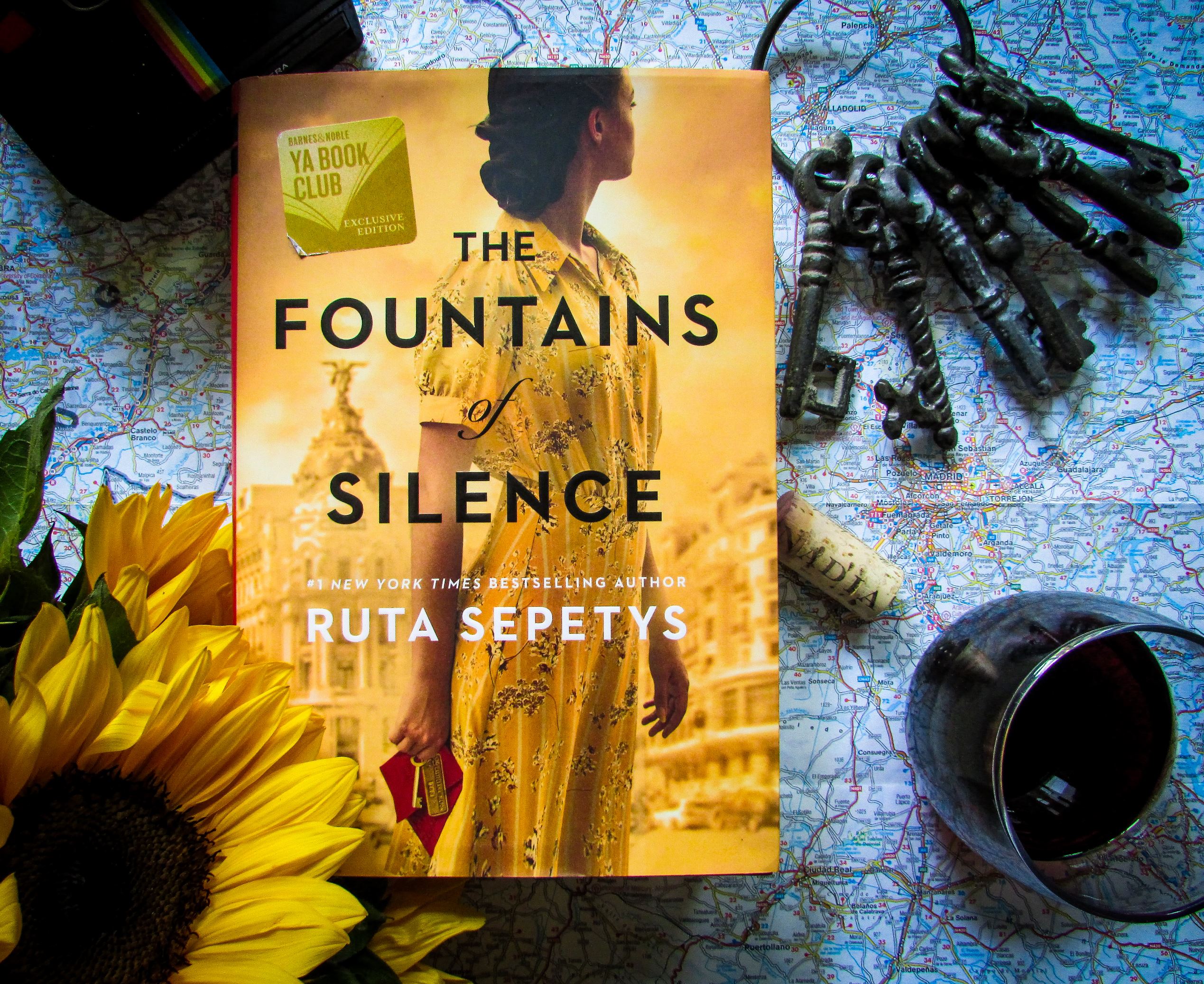 How do you write about a subject matter that you yourself have never experienced?  Where witnesses who did experience the trauma of war and their country’s hardships explain “It’s very difficult to explain.  It’s nuanced and complex for an outsider. You just can’t understand.” (Sepetys, 476) And it’s true, as an author, writing about someone else’s history, their past, is a difficult and monumental task.  Where the main characters are fiction, but the Civil War and the dictatorship of Franco is very much real.  And it takes a talented hand to pen a historical fiction that provides a lens to the unknown while showing respect to the people for whom her story represents.

Ruta Sepetys is a master story teller.  The Fountains of Silence is a masterpiece of a novel, thoroughly researched and speaks volumes of courage, resilience, survival, human suffering, and love during a dark time in Spain’s past.  Through her writings, Sepetys shines a light that brings clarity and understanding to the nuances and complexities of a time not so long ago. Sepetys writes our bleak history with such genuine care bridging our knowledge of a past we may have never known had she not taken the time to write it.

The Fountains of Silence is a story that unlocks the dark secrets of the Spanish Civil War which took place between 1936 and 1939.  Where a cruel dictator, General Francisco Franco did the unspeakable in order to keep his stronghold and power over the country.  Years later, after the end of the war, Sepetys begins her story in 1957.  A time where Spain opens its doors to the outside world, ensuring that those Spaniards who lost the war still suffer, but quietly, with secrets they wish never to share for fear of what Franco’s regime will continue to do.

In her research, Sepetys took those common refrains of those she interviewed and created her characters, her story, so that she (like her characters) could understand what happened.  She narrowed her focus to the youth of Spain.  The ones who weren’t the cause of this strife, but had to bare the repercussions, the wreckage, nonetheless.  And their losses were steep. They lost their innocence, their carefree ways, their hopes and dreams of having something more, something better than the cards that weren’t dealt, but inherited.

The story is told by three characters: two Spanish youths, and one American, whose mother was born in Spain and raised in her mother’s homeland traditions and language.  With each point of view we glimpse a world of uncertainty.  For Rafael Torres Moreno and his youngest sister, Ana, they are the youth that have suffered the most at the hands of Franco.  Murdered parents and shunned by society because of their association, they work tirelessly for a better life, which always seems out of reach.

On the other hand there is Daniel Matheson.  He is the outsider.  Daniel comes from a wealthy American family.  His father is a Texas oil tycoon, traveling to Spain for business and pleasure.  Daniel is a bright, handsome, and a well-mannered eighteen year old.  Although his father has different expectations, Daniel is a photographer in the making, ready to take in the place of his mother’s birth through the sharp lens of his camera.

As we traverse the map of Madrid and the fringe where Ana and her brother live, it becomes clearer that with each snapped shot, the lens of Daniel’s camera begins to tell another story than the one that is paraded around as truth.  His photographs bring him closer to Ana while also prompting dangerous questions.  All the while Ana struggles to maintain the status quo of remaining silent of her past, her family obligations, and her growing fondness towards the American cowboy.

I literally could not put this novel down.  The intricacies of the story were staggering, how a country could survive such atrocities and make amends with the past was mind boggling.  The lawyers of depth Sepetys showed with reflection on the subject matter, was no doubt a testament to the memory of those who lived, suffered, and survived the scars of this brutal past.  I am humbled and in awe of this novel and encourage readers as Ruta Sepetys does in her Authors Note, to continue the exploration of this time in our history so that we may never forget and always remember the voices who were supposed to remain silent.

The Sun Is Also a Star, Nicola Yoon

Salt to the Sea, Ruta Sepetys