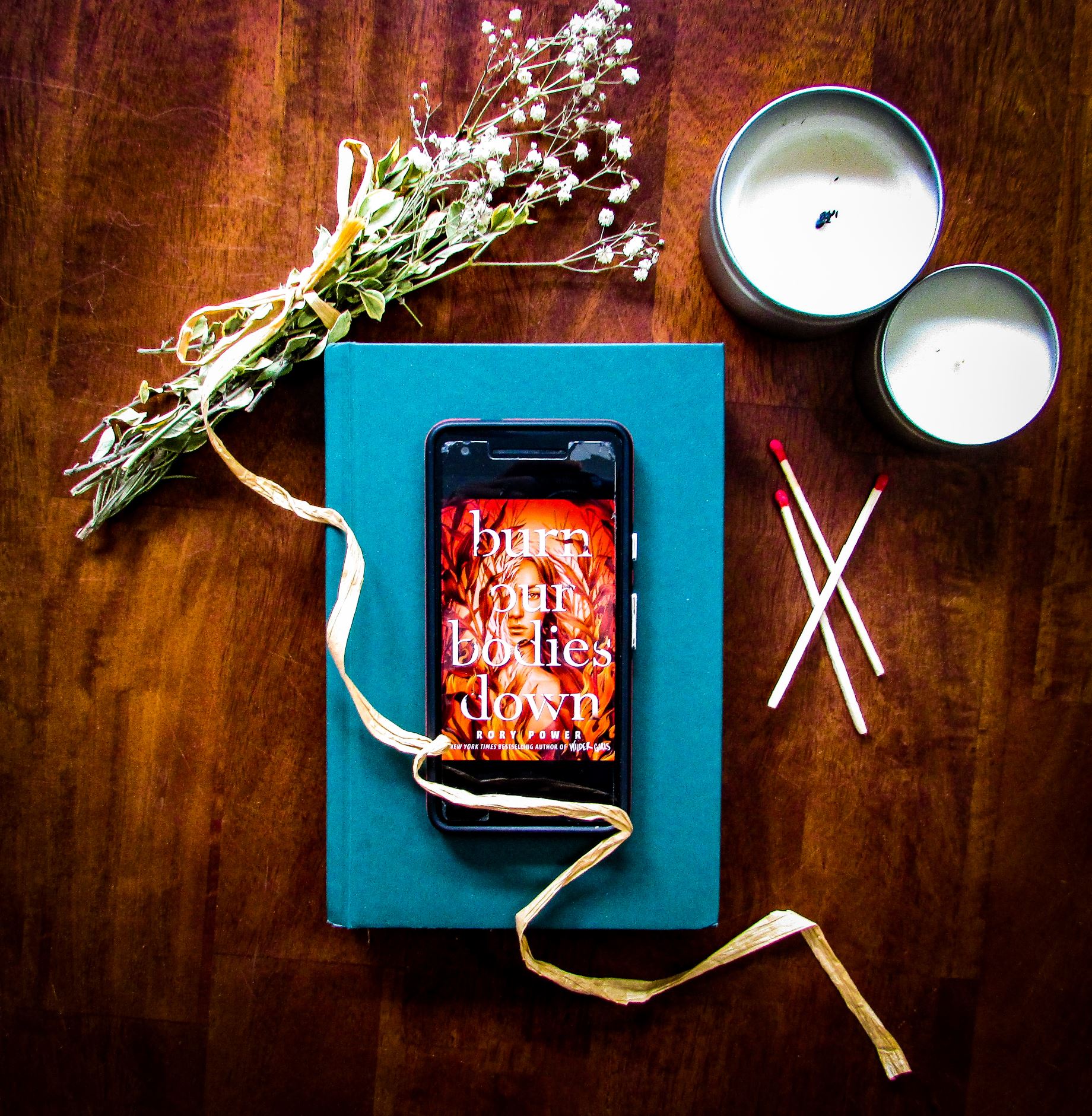 “A mystery that will hook you in to the very end, Burn Our Bodies Down, is as eerie as it is bizarre. Fans of the 90’s television show X-Files will devour this book whole.”

Margot Nielsen lives with her mom.  She doesn’t have a clue who her father is, let alone any of her extended family.  Whenever she asks she never gets a clear answer.

But when Margot stumbles upon an old picture of her mom with an address she takes a chance to discover who she is and where her family comes from.

And in a town, not so far from her own, called Phalene, Margot finds her family, but as the truths become more disturbingly clear, she may never find a way back home.

I purchased Rory Power’s debut novel, Wilder Girls, when it came out last year because one: the cover and two: the story was intriguing.  When I heard about her second novel and one: saw the cover and two: read the synopsis, I raised my hand and said, “Yes please!”

In Wilder Girls, Power’s really utilized the idea of isolation, setting her story smack on an island.  She wrote these brilliantly lush vivid details of her setting, creating a volatile atmosphere between the environment and the characters who inhabited it, making readers feel constantly on edge.

Whereas with Burn Our Bodies Down, Power is able to capture that same uneasiness, like the rushed notes of a violin, shrieking staccato, but missing those vivid details.  I compare it to a Vincent Van Gogh painting minus the paint.

But Dear Readers this book was a crazy and intense read.  The mystery of the novel grabbed me by the hand and held firm. Rory Power did an exceptional job of keeping you invested in reading the story.  She leaves small bread crumbs, details decisively placed to keep your fingers turning each page.

Even though the first fifty pages were sluggish, I still had the momentum of wanting to figure out what was going to happen next.  I needed to know why these characters were in this situation.  After Margot runs away from her half crazed mother (that relationship needs its own novel), I was still invested in what Margot would find when she got to Phalene.

Once Margot finally gets to Phalene the story morphed into something I wasn’t quiet expecting.   Something akin to an X-Files episode.  Everything about this new town was odd, strange, and unnerving.  The characters were as unsettling as the setting.  It was clear this was intentional, that perhaps everyone was drinking from the same contaminated proverbial Kool-Aide, but I felt that we needed at least one character rooted in reality.  Someone who could play point guard in helping Margot survive the nightmare she just stepped into.

While the ending is knock-you-out-of-your-seat jarring, I felt the reasoning behind all the madness was slightly disappointing.  Perhaps Power is making a political statement on humanity’s negative impact on the Earth (which I commend and agree with), but how that’s transcribed into her book, though shocking, lacks the full scope needed to make a completely satisfying conclusion.

Burn Our Bodies Down shows the fraying edges of a rundown town, a family with dark secrets, and the disturbing dynamics between mother and daughter.

Jacket Design: Unknown At this Time

If The Shoe Fits by Julie Murphy

The Girl From Shadow Springs by Ellie Cypher