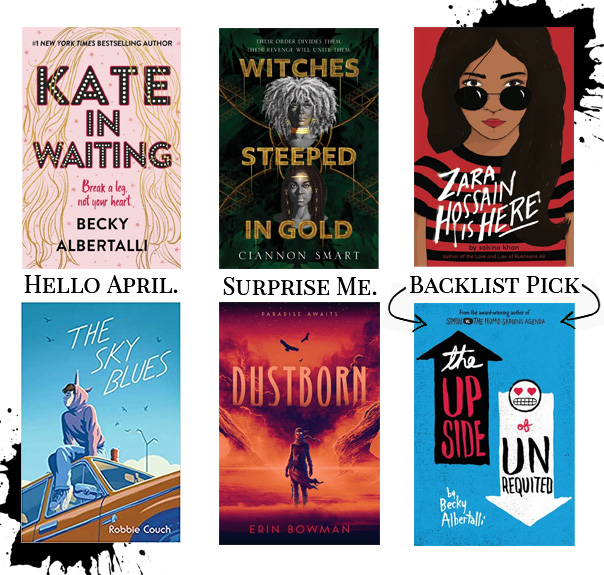 Today is the day to talk April 2021 YA Releases, and more specifically my Top 5 Reads. In this post I’ll be sharing my Top 5 books of April, one of which I had the pleasure of reading an Advance Readers Copy. Make sure to check out our updated YA Book Release Calendar for more books (YA and New Adult) coming out this month.

Contrary to popular belief, best friends Kate Garfield and Anderson Walker are not codependent. Carpooling to and from theater rehearsals? Environmentally sound and efficient. Consulting each other on every single life decision? Basic good judgment. Pining for the same guys from afar? Shared crushes are more fun anyway.

But when Kate and Andy’s latest long-distance crush shows up at their school, everything goes off script. Matt Olsson is talented and sweet, and Kate likes him. She really likes him. The only problem? So does Anderson.

Turns out, communal crushes aren’t so fun when real feelings are involved. This one might even bring the curtains down on Kate and Anderson’s friendship.

Iraya has spent her life in a cell, but every day brings her closer to freedom – and vengeance.

Jazmyne is the Queen’s daughter, but unlike her sister before her, she has no intention of dying to strengthen her mother’s power.

Sworn enemies, these two witches enter a precarious alliance to take down a mutual threat. But power is intoxicating, revenge is a bloody pursuit, and nothing is certain – except the lengths they will go to win this game.

This Jamaican-inspired fantasy debut about two enemy witches who must enter into a deadly alliance to take down a common enemy has the twisted cat-and-mouse of Killing Eve with the richly imagined fantasy world of Furyborn and Ember in the Ashes.

Zara’s family has waited years for their visa process to be finalized so that they can officially become US citizens. But it only takes one moment for that dream to come crashing down around them.

Seventeen-year-old Pakistani immigrant, Zara Hossain, has been leading a fairly typical life in Corpus Christi, Texas. Since her family moved there for her father to work as a pediatrician. While dealing with the Islamophobia that she faces at school, Zara has to lay low. Trying not to stir up any trouble. And not jeopardize their family’s dependent visa status while they await their green card approval, which has been in process for almost nine years.

But one day her tormentor, star football player Tyler Benson, takes things too far. Leaving a threatening note in her locker, and gets suspended. As an act of revenge against her for speaking out, Tyler and his friends vandalize Zara’s house with racist graffiti, leading to a violent crime that puts Zara’s entire future at risk. Now she must pay the ultimate price and choose between fighting to stay in the only place she’s ever called home or losing the life she loves and everyone in it.

Sky Baker may be openly gay, but in his small, insular town, making sure he was invisible has always been easier than being himself. Determined not to let anything ruin his senior year, Sky decides to make a splash at his high school’s annual beach bum party by asking his crush, Ali, to prom—and he has thirty days to do it.

What better way to start living loud and proud than by pulling off the gayest promposal Rock Ledge, Michigan, has ever seen?

Then, Sky’s plans are leaked by an anonymous hacker in a deeply homophobic e-blast that quickly goes viral. He’s fully prepared to drop out and skip town altogether—until his classmates give him a reason to fight back by turning his thirty-day promposal countdown into a school-wide hunt to expose the e-blast perpetrator.

But what happens at the end of the thirty days? Will Sky get to keep his hard-won visibility? Or will his small-town blues stop him from being his true self?

Delta of Dead River sets out to rescue her family from a ruthless dictator rising to power in the Wastes and discovers a secret that will reshape her world in this postapocalyptic Western mashup for fans of Mad Max and Gunslinger Girl.

Delta of Dead River has always been told to hide her back, where a map is branded on her skin to a rumored paradise called the Verdant. In a wasteland plagued by dust squalls, geomagnetic storms, and solar flares, many would kill for it—even if no one can read it. So when raiders sent by a man known as the General attack her village, Delta suspects he is searching for her.

Delta sets out to rescue her family but quickly learns that in the Wastes no one can be trusted—perhaps not even her childhood friend, Asher, who has been missing for nearly a decade. If Delta can trust Asher, she just might decode the map and trade evidence of the Verdant to the General for her family. What Delta doesn’t count on is what waits at the Verdant: a long-forgotten secret that will shake the foundation of her entire world.

Seventeen-year-old Molly Peskin-Suso knows all about unrequited love—she’s lived through it twenty-six times. She crushes hard and crushes often, but always in secret. Because no matter how many times her twin sister, Cassie, tells her to woman up, Molly can’t stomach the idea of rejection. So she’s careful. Fat girls always have to be careful.

Then a cute new girl enters Cassie’s orbit, and for the first time ever, Molly’s cynical twin is a lovesick mess. Meanwhile, Molly’s totally not dying of loneliness—except for the part where she is. Luckily, Cassie’s new girlfriend comes with a cute hipster-boy sidekick. Will is funny and flirtatious and just might be perfect crush material. Maybe more than crush material. And if Molly can win him over, she’ll get her first kiss and she’ll get her twin back. There’s only one problem: Molly’s coworker Reid. He’s an awkward Tolkien superfan with a season pass to the Ren Faire, and there’s absolutely no way Molly could fall for him. Right?

“Have you joined the “Beat the Backlist Challenge?”

Search no further for a Backlist Recommendation, as I post books I’m eyeing to get this month and also a backlist rec that I plan on reading. Yes, I know I’m a mood reader, but if I want to tick those titles that have been on my shelves for well… You know what I mean, then I’ll be joining you this month on my backlist recommendation of the wonderful Becky Albertalli. And as we wait for Kate In Waiting Albertalli’s The Upside of Unrequited can keep us busy.

See any April 2021 YA Releases you can’t wait to read?

Share any April 2021 YA releases you’re looking forward to in the comments.