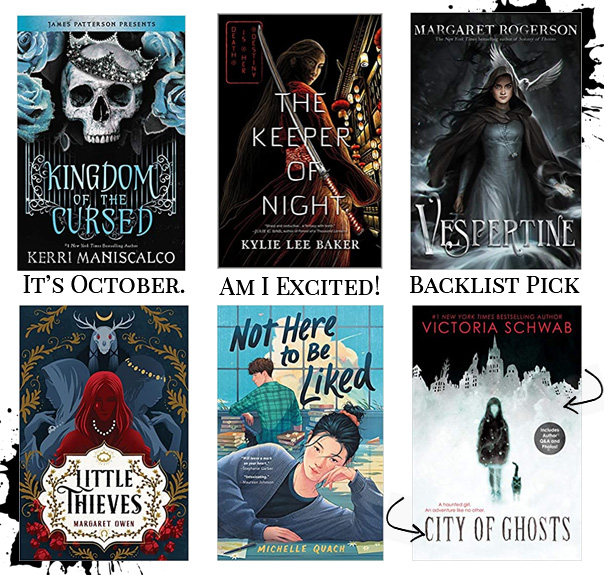 Today is the day to talk New YA Releases in October 2021. And more specifically my Top 5 Reads. In this post I’ll be sharing my Top 5 books of October.

Friends, am I excited for the new books hitting shelves this month!

I have a number that I’ve pre-ordered months ago and will probably shove my entire reading list aside to jump into those stories. Just being honest.

But what I want to know: What books are you looking forward to in October?

And have you seen the covers of these books? They’re making me ache for fall. Plus, with this heat wave, I wouldn’t mind the cooler weather.

Now, this months list of books I’ve had on my radar for a while and I cannot wait to read. A number of books I’ve already had the pleasure of reading. And I hope you do too.

As always, remember, as we continue to read, make sure that we keep adding Own Voices, BIPOC, and LGBTQIA+ reads to our shelves. Keep the momentum friends of broadening our bookshelves to reflect the diverse topography of the world.

Let’s dive into the new YA Releases in October that you should definitely add to your TBR’s.

Infinite deception with a side of revenge . . . Welcome to Hell.

After selling her soul to become Queen of the Wicked, Emilia travels to the Seven Circles with the enigmatic Prince of Wrath, where she’s introduced to a seductive world of vice.

She vows to do whatever it takes to avenge her beloved sister, Vittoria . . . even if that means accepting the hand of the Prince of Pride, the king of demons.

The first rule in the court of the Wicked? Trust no one. With back-stabbing princes, luxurious palaces, mysterious party invitations, and conflicting clues about who really killed her twin, Emilia finds herself more alone than ever before. Can she even trust Wrath, her one-time ally in the mortal world . . or is he keeping dangerous secrets about his true nature?

Emilia will be tested in every way as she seeks a series of magical objects that will unlock the clues of her past and the answers she craves . . .

Once upon a time, there was a horrible girl…

Vanja Schmidt knows that no gift is freely given, not even a mother’s love–and she’s on the hook for one hell of a debt. Vanja, the adopted goddaughter of Death and Fortune, was Princess Gisele’s dutiful servant up until a year ago. That was when Vanja’s otherworldly mothers demanded a terrible price for their care, and Vanja decided to steal her future back… by stealing Gisele’s life for herself.

The real Gisele is left a penniless nobody. While Vanja uses an enchanted string of pearls to take her place. Now, Vanja leads a lonely but lucrative double life as princess and jewel thief. Charming nobility while emptying their coffers to fund her great escape. Then, one heist away from freedom, Vanja crosses the wrong god. She is cursed to an untimely end: turning into jewels, stone by stone, for her greed.

Vanja has just two weeks to figure out how to break her curse and make her getaway. And with a feral guardian half-god, Gisele’s sinister fiancé, and an overeager junior detective on Vanja’s tail, she’ll have to pull the biggest grift yet to save her own life.

When her failure to control her Shinigami abilities drives Ren out of London, she flees. In Japan she seeks the acceptance she’s never gotten from her fellow Reapers. Accompanied by her younger brother, the only being on earth to care for her. Ren enters the Japanese underworld to serve the Goddess of Death…

Only to learn that here, too, she must prove herself worthy. Determined to earn respect, Ren accepts an impossible task. She must find and eliminate three dangerous Yokai demons and learn how far she’ll go to claim her place at Death’s side.

The dead of Loraille do not rest.

Artemisia is training to be a Gray Sister, a nun who cleanses the bodies of the deceased so that their souls can pass on; otherwise, they will rise as spirits with a ravenous hunger for the living. She would rather deal with the dead than the living, who trade whispers about her scarred hands and troubled past.

When her convent is attacked by possessed soldiers, Artemisia defends it by awakening an ancient spirit bound to a saint’s relic. It is a revenant, a malevolent being that threatens to possess her the moment she drops her guard. Wielding its extraordinary power almost consumes her–but death has come to Loraille, and only a vespertine, a priestess trained to wield a high relic, has any chance of stopping it. With all knowledge of vespertines lost to time, Artemisia turns to the last remaining expert for help: the revenant itself.

As she unravels a sinister mystery of saints, secrets, and dark magic, her bond with the revenant grows. And when a hidden evil begins to surface, she discovers that facing this enemy might require her to betray everything she has been taught to believe–if the revenant doesn’t betray her first.

Not Here to Be Liked by Michelle Quach

Eliza Quan is the perfect candidate for editor in chief of her school paper. That is, until ex-jock Len DiMartile decides on a whim to run against her. Suddenly her vast qualifications mean squat because inexperienced Len–who is tall, handsome, and male–just seems more like a leader.

When Eliza’s frustration spills out in a viral essay, she finds herself inspiring a feminist movement she never meant to start, caught between those who believe she’s a gender equality champion and others who think she’s simply crying misogyny.

Amid this growing tension, the school asks Eliza and Len to work side by side to demonstrate civility. But as they get to know one another, Eliza feels increasingly trapped by a horrifying realization–she just might be falling for the face of the patriarchy himself.

Additional New YA Releases To ADD to Your TBR AND Pre-Order!

City of Ghosts by Victoria Schwab 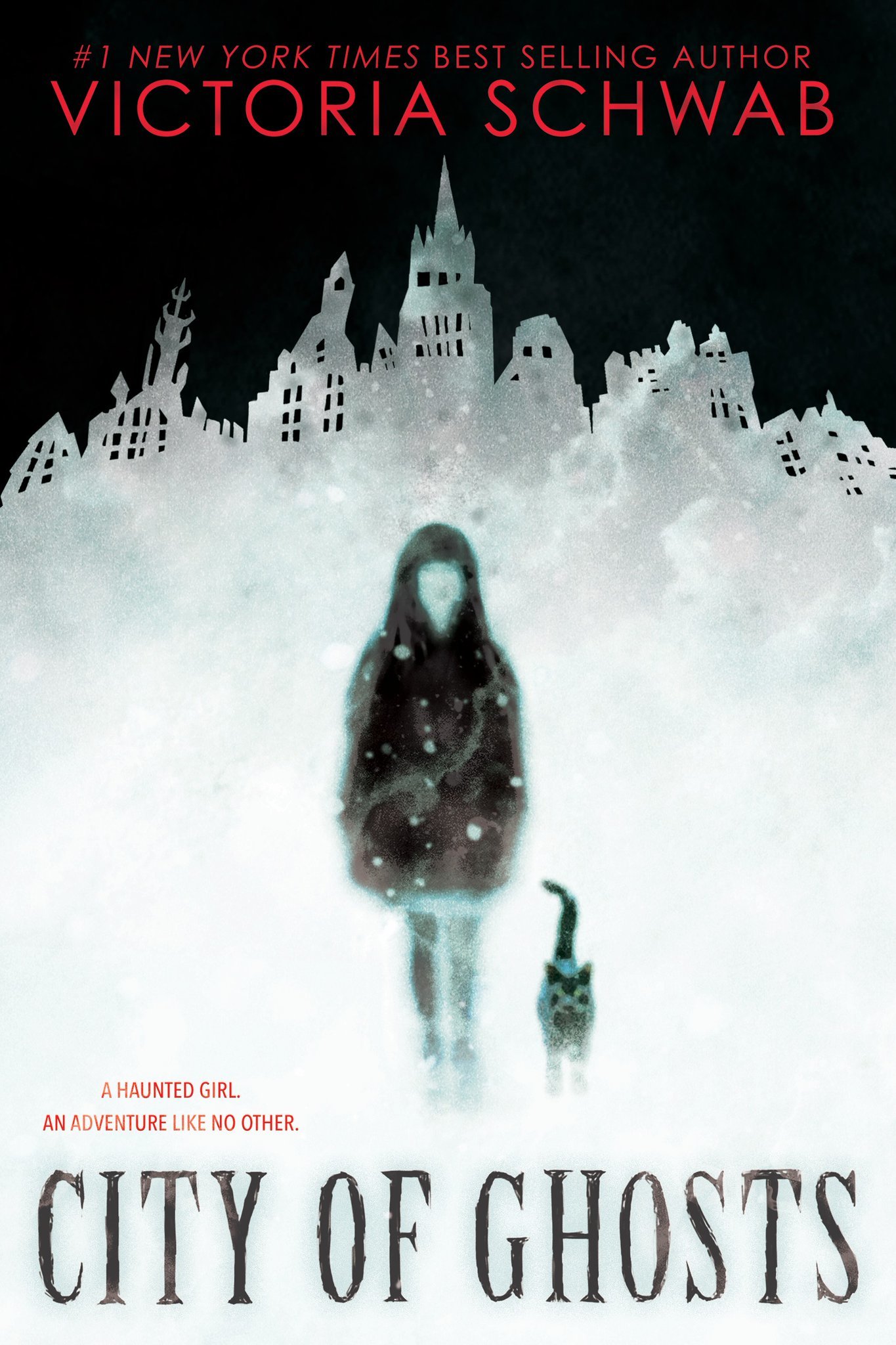 Cassidy Blake’s parents are The Inspecters, a (somewhat inept) ghost-hunting team. But Cass herself can REALLY see ghosts. In fact, her best friend, Jacob, just happens to be one.

When The Inspecters head to ultra-haunted Edinburgh, Scotland, for their new TV show, Cass—and Jacob—come along. In Scotland, Cass is surrounded by ghosts, not all of them friendly. Then she meets Lara, a girl who can also see the dead. But Lara tells Cassidy that as an In-betweener, their job is to send ghosts permanently beyond the Veil. Cass isn’t sure about her new mission, but she does know the sinister Red Raven haunting the city doesn’t belong in her world. Cassidy’s powers will draw her into an epic fight that stretches through the worlds of the living and the dead, in order to save herself.

Search no further for a Backlist Recommendation for the month of October. As I post books I’m eyeing to read and purchase this month, I still have a goal of reading books from my backlist.

I’ll be joining you this month on my backlist recommendation of Victoria Schwab’s City of Ghosts.

October 2021 YA releases on my Bookshop site. Click the link in the caption above to pre-order or order your copy ⬆️

See any October 2021 YA releases you can’t wait to read?

Share any new YA releases you’re looking forward to in the comments.

Tags: Bad Girls Never Say Die, Disability Visibility, Everything Within and In Between, Jade Fire Gold, Kerri Maniscalco, Kingdom of the Cursed, Kylie Lee Baker, Little THieves, Margaret Owen, Margaret Rogerson, Michelle Quach, Not Here to Be Liked, Our Way Back to Always, The City Beautiful, The Falling Girls, The Keeper of Night, The Night When No One Had Sex, Thronebreakers, Top 5, Vespertine, Why We Fly, Within These Wicked Walls