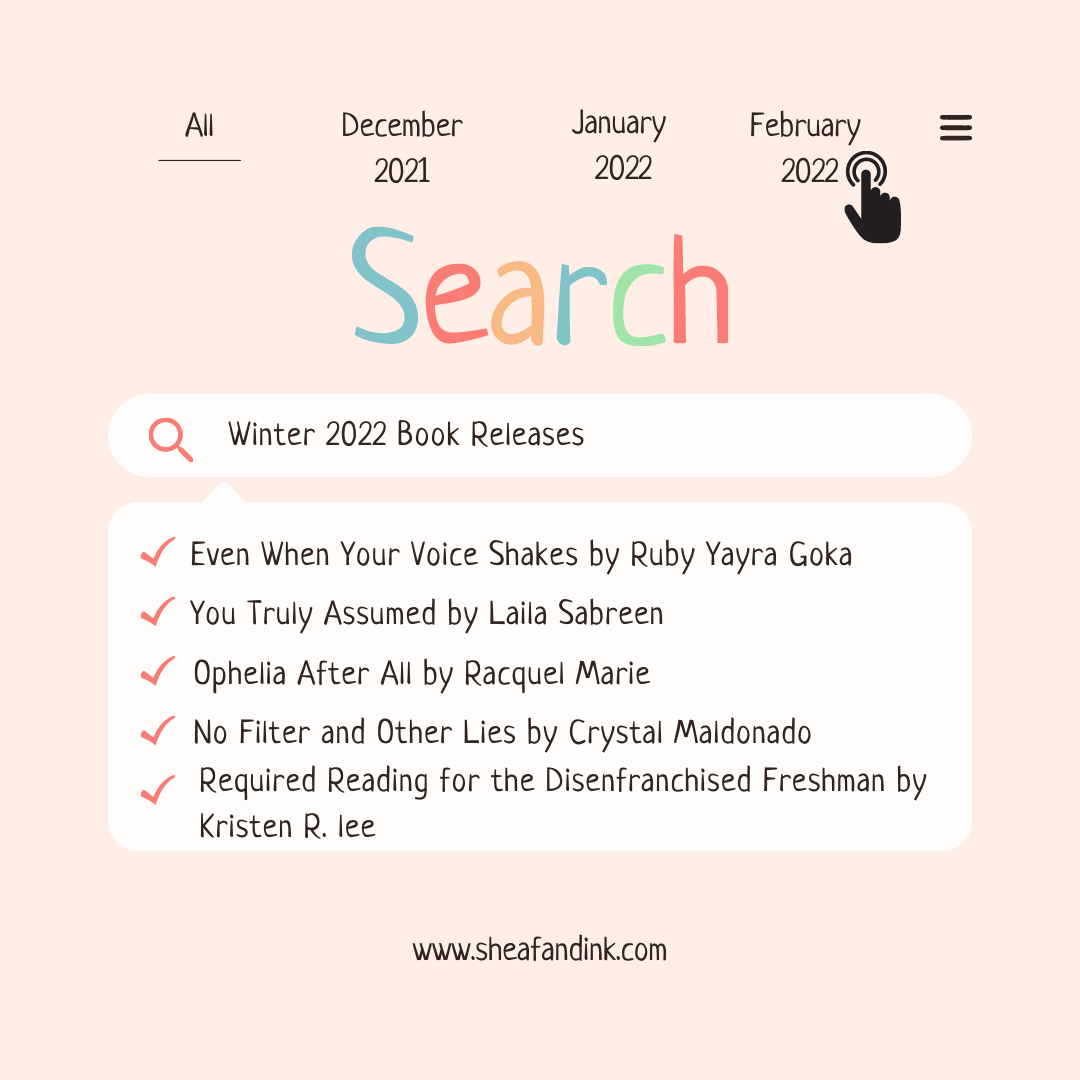 Happy February everyone! It’s always a bonus when the month starts on a Tuesday, so let’s dive into our New Release February 2022. A reminder, this is only a preview of winter books to check out, if you need more options check out my curated list on Bookshop.

When Amerley is offered a job working for one of her mother’s old school friends, she knows she has to accept. Her wages will feed her family, help her sisters stay in school, and ensure that her mother won’t have to worry about them.

Amerley’s move to Accra isn’t easy, but she soon settles into her new life away from her small village–until she is raped by the son of her employer. Torn between keeping quiet to keep her job and speaking up for herself and for justice, Amerley must decide how to live her truth, and the impact of her choice will be felt through her entire community.

Through the life of an ordinary girl from a small country village, Even When Your Voice Shakes exposes the damage wrought by institutionalized misogyny and poverty and reveals how even those who are most disadvantaged are never without their own power.

A striking debut novel about racism on elite college campuses. Fans of Dear White People will embrace this activist-centered contemporary novel about a college freshman grappling with the challenges of attending an elite university with a disturbing racist history, which may not be as distant as it seems.

Savannah Howard sacrificed her high school social life to make sure she got into a top college. Her sights were set on an HBCU, but when she is accepted to the ivy-covered walls of Wooddale University on a full ride, how can she say no?

Wooddale is far from the perfectly manicured community it sells on its brochures, though. Savannah has barely unpacked before she comes face to face with microagressions stemming from racism and elitism. Then Clive Wilmington’s statue is vandalized with blackface. The prime suspect? Lucas Cunningham, Wooddale’s most popular student and son of a local prominent family. Soon Savannah is unearthing secrets of Wooddale’s racist history. But what’s the price for standing up for what is right? And will telling the truth about Wooddale’s past cost Savannah her own future?

A stunning, challenging, and timely debut about racism and privilege on college campuses.

In this compelling and thought-provoking debut novel, after a terrorist attack rocks the country and anti-Islamic sentiment stirs, three Black Muslim girls create a space where they can shatter assumptions and share truths.

Sabriya has her whole summer planned out in color-coded glory, but those plans go out the window after a terrorist attack near her home. When the terrorist is assumed to be Muslim and Islamophobia grows, Sabriya turns to her online journal for comfort. You Truly Assumed was never meant to be anything more than an outlet, but the blog goes viral as fellow Muslim teens around the country flock to it and find solace and a sense of community.

Soon two more teens, Zakat and Farah, join Bri to run You Truly Assumed and the three quickly form a strong friendship. But as the blog’s popularity grows, so do the pushback and hateful comments. When one of them is threatened, the search to find out who is behind it all begins, and their friendship is put to the test when all three must decide whether to shut down the blog and lose what they’ve worked for…or take a stand and risk everything to make their voices heard.

You should know, right now, that I’m a liar. They’re usually little lies. Tiny lies. Baby lies. Not so much lies as lie adjacent. But they’re still lies.

Twenty one-year-old Max Monroe has it all: beauty, friends, and a glittering life filled with adventure. With tons of followers on Instagram, her picture-perfect existence seems eminently enviable. Except it’s all fake.

Max is actually 16-year-old Kat Sanchez, a quiet and sarcastic teenager living in drab Bakersfield, California. Nothing glamorous in her existence–just sprawl, bad house parties, a crap school year, and the awkwardness of dealing with her best friend Hari’s unrequited love.

But while Kat’s life is far from perfect, she thrives as Max: doling out advice, sharing beautiful photos, networking with famous influencers, even making a real friend in a follower named Elena. The closer Elena and “Max” get–texting, Snapping, and even calling–the more Kat feels she has to keep up the façade.

But when one of Max’s posts goes ultra-viral and gets back to the very person she’s been stealing photos from, her entire world – real and fake — comes crashing down around her. She has to figure out a way to get herself out of the huge web of lies she’s created without hurting the people she loves. But it might already be too late.

A teen girl navigates friendship drama, the end of high school, and discovering her queerness in Ophelia After All, a hilarious and heartfelt contemporary YA debut by author Racquel Marie.

Ophelia Rojas knows what she likes: her best friends, Cuban food, rose-gardening, and boys – way too many boys. Her friends and parents make fun of her endless stream of crushes, but Ophelia is a romantic at heart. She couldn’t change, even if she wanted to.

So when she finds herself thinking more about cute, quiet Talia Sanchez than the loss of a perfect prom with her ex-boyfriend, seeds of doubt take root in Ophelia’s firm image of herself. Add to that the impending end of high school and the fracturing of her once-solid friend group, and things are spiraling a little out of control. But the course of love–and sexuality–never did run smooth.

As her secrets begin to unravel, Ophelia must make a choice between clinging to the fantasy version of herself she’s always imagined or upending everyone’s expectations to rediscover who she really is, after all. 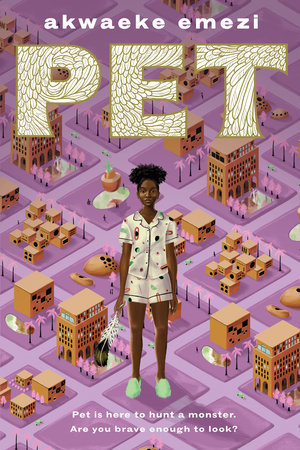 Pet is here to hunt a monster. Are you brave enough to look? There are no more monsters anymore, or so the children in the city of Lucille are taught. With doting parents and a best friend named Redemption, Jam has grown up with this lesson all her life. But when she meets Pet, a creature made of horns and colours and claws, who emerges from one of her mother’s paintings and a drop of Jam’s blood, she must reconsider what she’s been told. Pet has come to hunt a monster, and the shadow of something grim lurks in Redemption’s house. Jam must fight not only to protect her best friend, but also to uncover the truth, and the answer to the question — How do you save the world from monsters if no one will admit they exist?

In their riveting and timely young adult debut, acclaimed novelist Akwaeke Emezi asks difficult questions about what choices a young person can make when the adults around them are in denial.

Search no further for a Backlist Recommendation for the month of February. As I post books I’m eyeing to read this month, I still have a goal of reading books from my backlist.

Join me this month on my backlist recommendation of Pet by Akwaeke Emezi. Akwaeke Emezi also has a book coming out this month, a companion novel to Pet to add to your TBR.

After a childhood in foster care, Bitter is thrilled to have been chosen to attend Eucalyptus, a special school where she can focus on her painting surrounded by other creative teens. But outside this haven, the streets are filled with protests against the deep injustices that grip the city of Lucille.

Bitter’s instinct is to stay safe within the walls of Eucalyptus . . . but her friends aren’t willing to settle for a world that’s so far away from what they deserve. Pulled between old friendships, her artistic passion, and a new romance, Bitter isn’t sure where she belongs–in the studio or in the streets. And if she does find a way to help the revolution while being true to who she is, she must also ask: at what cost?

This timely and riveting novel–a companion to the National Book Award finalist Pet–explores the power of youth, protest, and art.

February 2022 new releases on Bookshop.org . Click the link in the caption above to pre-order or order your copy of my top five today. ⬆️

See any New February Releases you can’t wait to read?