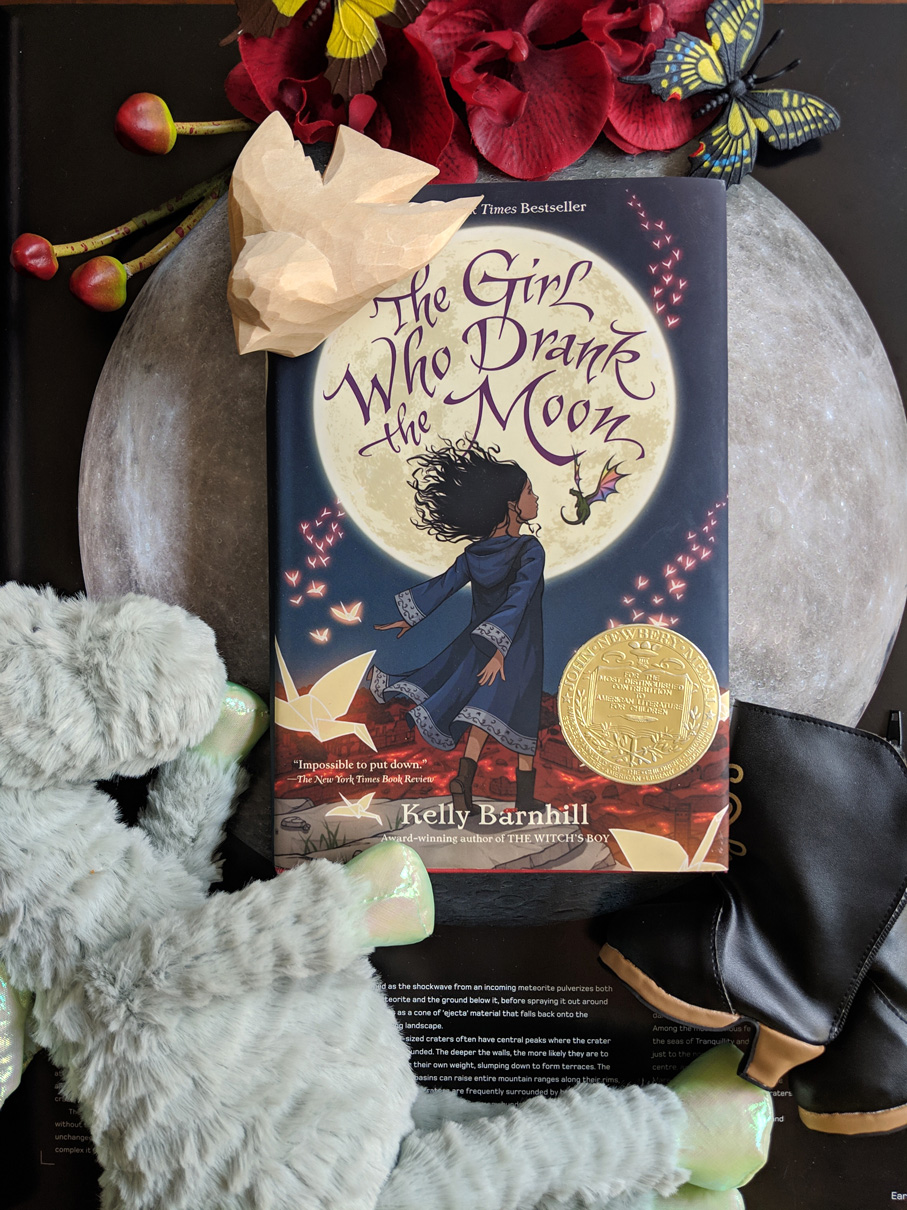 Can you remember your favorite novel as a child?  How you felt when you first cracked open the spine, the scent of each crisp page as you turned it delicately to the next, until you finally reach chapter one?  Then it begins, your eyes dart across the page, drinking in every sentence, perfectly written, the words reading like poetry instead of prose; it’s all so vivid, so real that the characters have come to life right before your eyes.  Kelly Barnhill’s The Girl Who Drank the Moon gave me those exact feelings.

Barnhill’s novel takes us on a wild magical journey with uncertainties and unexpected twists, with clever Chapter Titles (favorites include: In Which a Witch Accidentally Enmagics an Infant and In Which a Magical Child Is more Trouble by Half) and cleverer writing.  When we start our journey (Chapter Title: In Which an Unfortunate Woman Goes Quite Mad) we find ourselves in a village, a unique village named Protectorate, or as it’s widely known by far away towns and cities: City of Sorrows.  This name (although rather depressing) perfectly fits this village, for every year a child must be sacrificed to the witch who lives in the forest.

This year’s Day of Sacrifice—the day an infant is offered to the witch— is different.  This infant and her mother are different from all the other countless children and parents who gave over their children with no questions, no outcry or protest.  This child and mother were distinct.  They were defiant.  They objected, and they fought (in their own way) to stay together.  And it was this child, a baby girl with curls as black as a raven’s breast, eyes that were deep and intense as the stars that brighten our galaxy, and skin that was luminescent; this infant would change everything.

“They thought she was gone forever.

As we travel the unsettling terrain, from the Protectorate, crisscrossing through the forest and the world beyond, we have the guidance of a witch named Xan, who really isn’t a bad witch at all (even though the City of Sorrow would tell you otherwise), a Swamp Monster, who is also a poet, a Perfectly Tiny Dragon who believes he’s not tiny at all, and Antain, a keen and inquisitive boy who grows to be a sought after wood carver.  If we didn’t have these characters as our guides we would have been utterly lost, or worse, be completely consumed by the same numbing sadness as those who call the City of Sorrows their home.

The Girl Who Drank the Moon is a story that compels us to feel every emotion, with layers of themes that propel characters into action, when so many refuse to do nothing at all. We observe each character enduring some form of violence or cruelty: being left in a forest as an infant, having your child ripped from your arms, never knowing if you would ever see her again, a young boy (a child really) witnessing the awful events of The Day of Sacrifice, and having to live with the wrongness of what was done to both mother and child as he grows into a young man.  And yet they still hold on to hope, something that is so fragile that it can easily slip away.  But these characters have a strong steady grip.

The theme that is most vibrant, most steadfast throughout the novel is love.  From a mothers hope to be reunited with her stolen child, to the witch who raises the infant as her own, we are constantly reminded of the persistent inner-strength and unceasing love these characters possess as they traverse the treacherous terrain of the forest, the bog, and the thick clouds of grief that settles over the City of Sorrow like water over a sinking stone.

The Girl Who Drank the Moon was difficult to put down.  It was an easy trade to have a little less sleep, and commit to a full night of page turning, curled up in the corner of the couch. Once I reached the end, I wanted to read it all over again.

The Thing About Jellyfish, Ali Benjamin

Rent A Boyfriend by Gloria Chao

The Gilded Ones by Namina Forna

The Night When No One Had Sex by Kalena Miller