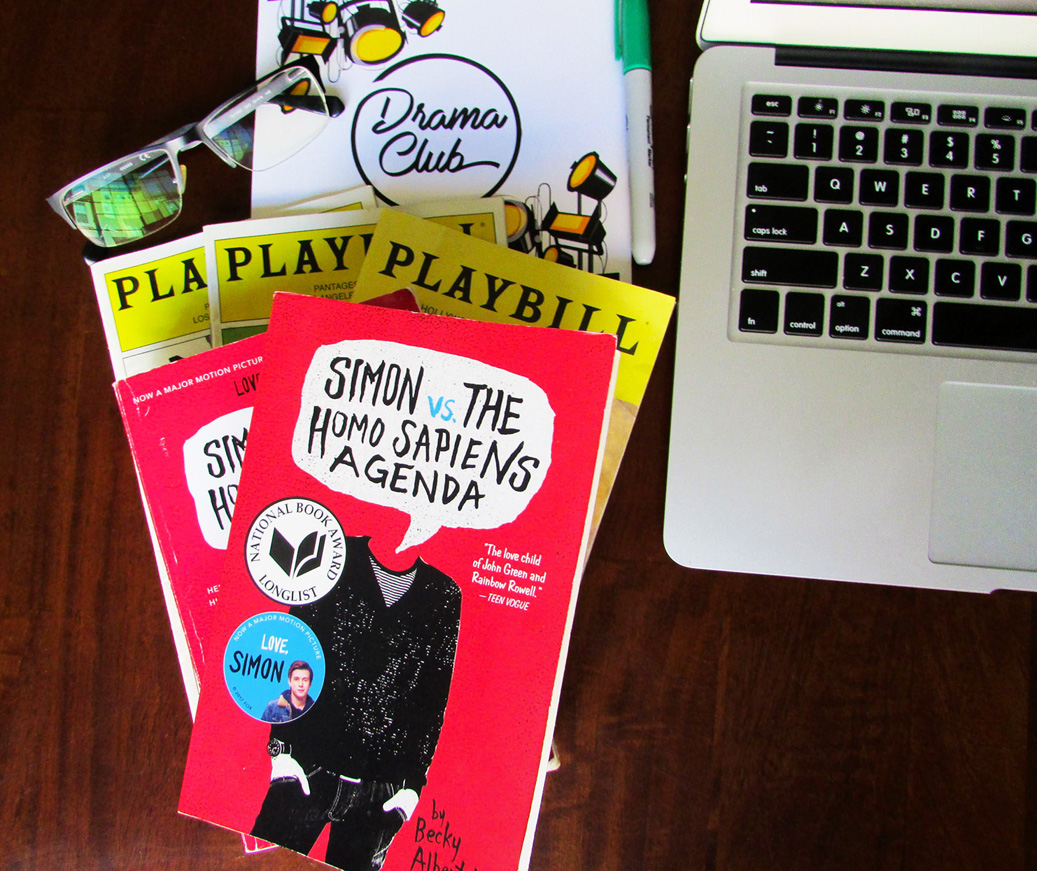 Have you ever made a mistake that you later regretted?  And you want to kick yourself when someone takes advantage of that mistake.  Where that said person is willing to use the newly gained information against you to obtain something they want?  This is extortion. And at this point, you stop wanting to kick yourself and turn those inward aggressive feelings, outward, to the prig trying to blackmail you.

So here’s the deal, Simon is gay.  And he hasn’t told his parents.  Luckily for Simon, though, he has an incredible, loving, supportive, and accepting network of human beings that make up his family and friends.  It’s just never occurred to him, the whole “coming-out” thing, until now.

After happening upon a post about being gay on his high school’s unofficial Tumblr page, Simon becomes intrigued.  He begins a correspondence via email with the author of the original thread who goes by the name Blue.

The correspondence between Simon and Blue are scattered between chapters of Simon’s own POV.  Each chapter of the emails is the savory portions, especially when we as readers are trying to figure out Blue’s identity.  At first, the emails start light and friendly, as though Blue and Simon are two friends just getting to know each other.  Over time, the emails shift to a more profoundly intimate conversation, which is as emotional as they are meaningful in any growing relationship.

While Simon and Blue’s emails build momentum, gradually becoming more flirtatious, empowered by the fact neither boy knows the other’s identity, Simon, like every teenager, has his faults.  What complicates matters is a mistake.  Although Simon is a likable, observant, and funny character, he sometimes isn’t careful.  He makes the mistake of not logging off his email account at the school library.  When a student, Martin Addison, sees Simon’s emails with Blue, he uses that information (takes a screenshot with his phone!!! I. Kid. You. Not!) against Simon to get what he wants.

As Simon tries to figure out Blue’s identity, he’s simultaneously dealing with the anxiety and annoyance that someone is using his sexual preference against him.  Even though Simon doesn’t bother to tell his friends what’s really going on, each friend is another gem to the treasure that is this novel.  Every secondary character Albertalli’s creates is richly developed with their own unique personalities that stand out, making this journey a more real and personal one.

What I find so poignant about this novel is the way Albertalli addresses the ever-present homophobic bigotry in high school and how Simon reacts and deals with it.  There is this powerful moment in the novel, where Simon is forced to confront his cyberbully in person.  It is a moment that defines the novel and holds Martin Addison accountable (and the Homo sapiens agenda) for his blatant discrimination and hate-filled intentions.

“You don’t get to say it’s not a big thing.  This is a big f-ing thing okay?  This was supposed to be—this is mine.  I’m supposed to decide when and where and who knows and how I want to say it. “So, yeah, you took that from me.  And then you brought Blue into it?” (196, Albertalli)

Simon should have the fundamental right to choose who he wants to have a relationship with.  Regardless of sexual preference, everyone should have the choice to find happiness with whoever makes them happy.  It is their choice.  Their moment.  Their happiness.  And that should never be taken away.  But the glaring truth of this whole situation is coming out isn’t easy. It’s not easy because society doesn’t make it easy.  When teenagers (or adults) do come out, for some reason it still makes them seen as “other,” rather than a whole person included and accepted in society.

Even though Simon was not open about being gay, he shouldn’t have been forced to reckon with his sexuality on someone else’s terms.   It was up to him to decide, but that was taken away from him, and now he has to figure out how to be openly gay, without losing everything he had, including falling in love with a potential boyfriend, he’s never even met.

Albertalli nails the high school experience by penning a perfect rendition of a modern-day high school experience.  She delivers in every way imaginable.  Throughout Simon vs. the Homo Sapiens Agenda, Albertalli effortlessly constructs the teenage language, their social norms, behaviors, and all the angst and drama any sixteen-year-old will relate to and appreciate.  It’s a real and moving coming-of-age and coming-out story, providing a true glimpse into the world of a teenager who is “not-so-openly gay.” (Albertalli, Book Synopsis)

It was the best kind of love story.  One that should be read and re-read immediately after.  Because if we’re honest, you can’t help but fall in love with Simon Spier and the captivating tale that is this novel.

Aristotle and Dante Discover the Secrets of the Universe, Benjamin Alire Sáenz

The Hate U Give, Angie Thomas

The Gentleman’s Guide to Vice and Virtue, Mackenzi Lee

This Is My America by Kim Johnson Advance Reader Copy (ARC)