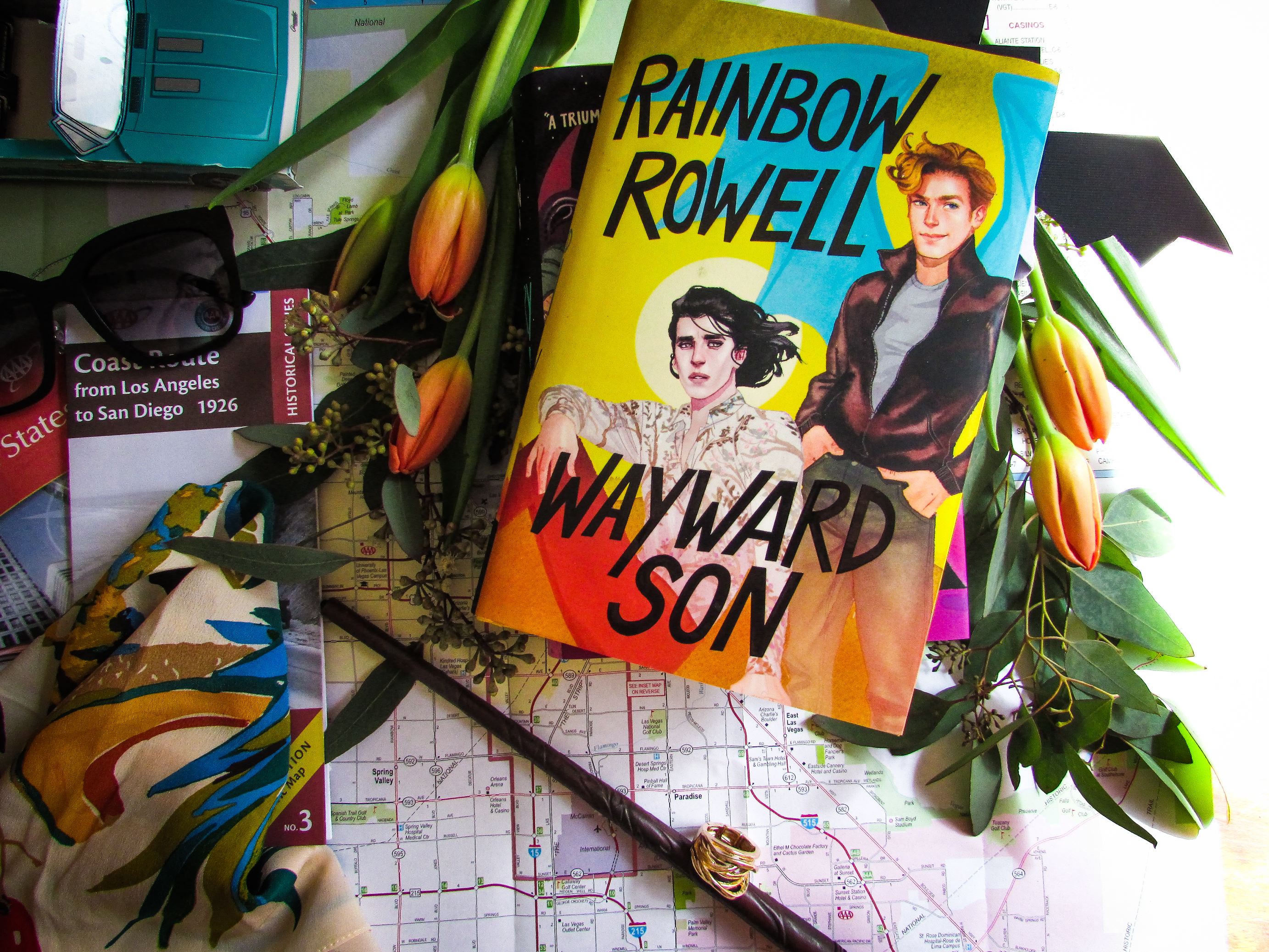 A road trip you don’t want to miss.  Rowell does it again, with cleverer and witty writing that makes for a fun filled read.

It’s the anticipated sequel to Carry On, where Simon Snow, his bestie Penelope (Penny), and boyfriend Baz go on holiday across the United States.

Ever since defeating the Mage, fulfilling his prophecy at the cost of losing his magic, but gaining a pair of wicked wings and a tail, Simon Snow is anything but fine (he’s even considering breaking up with Baz, it’s that bad).  But Penny thinks Snow just needs a new perspective, a different setting, and suggests a trip across the Atlantic to the USA.

Yet, America is not at all as they expected, with no real magic community to enforce magical rules, it’s like the Wild West and the spells are different too (the syntax doesn’t ring the same) leaving Penny and Baz confounded by the difficulty of casting spells.  Vampires are out in the open, not being treated like villains (as they are in the UK), but are like regular people (gasp, what will Baz do???) as they blaze across the states in a classic Mustang, saltwater blue, heading into one disaster to the next.  Traversing further towards the West Coast after finding out their friend Agatha may be in danger, Simon, Baz, and Penny are clearly out of their element and constantly struggle with what to do next.

Rowell’s novel is a fast pace adventure, where we encounter new magical creatures and vampires in Vegas.  We begin to explore the depths of the magical world Rowell creates.  What absolves the disorganized plot, the insufficient insight into Snow and Baz’s relationship, and, well, the ending, is the incredible dialogue Rowell masterfully builds between her characters.  There are dozens of pages that have been marked throughout the novel of great lines that kept a smile on my face.  I’m not going to lie, it was incredible.

Not only is the dialogue brilliant, but it also amplifies Snow’s, Baz’s, and Penny’s mental state of mind.  How each character is dealing with their own identity crisis: Baz being a vampire, Penny’s lack of executive decision making, and Simon with the tail and wings, unable to grasp at what was once an easily predictable existence.

With only a few concerns, overall, I enjoyed this novel.  It was Simon Snow saving the day with his friends by his side, showing the world that these teenagers, these Mages are more than what they seem.  It’s nice to know that there will be another novel after this one.  My hope is that Baz and Simon will work out their very complex relationship, coexisting together, with a splash of romance (or more, because these two are all kinds of adorable) while taking on the next magical creatures Rowell throws at them.

The Gentleman’s Guide to Vice and Virtue, Mackenzi Lee