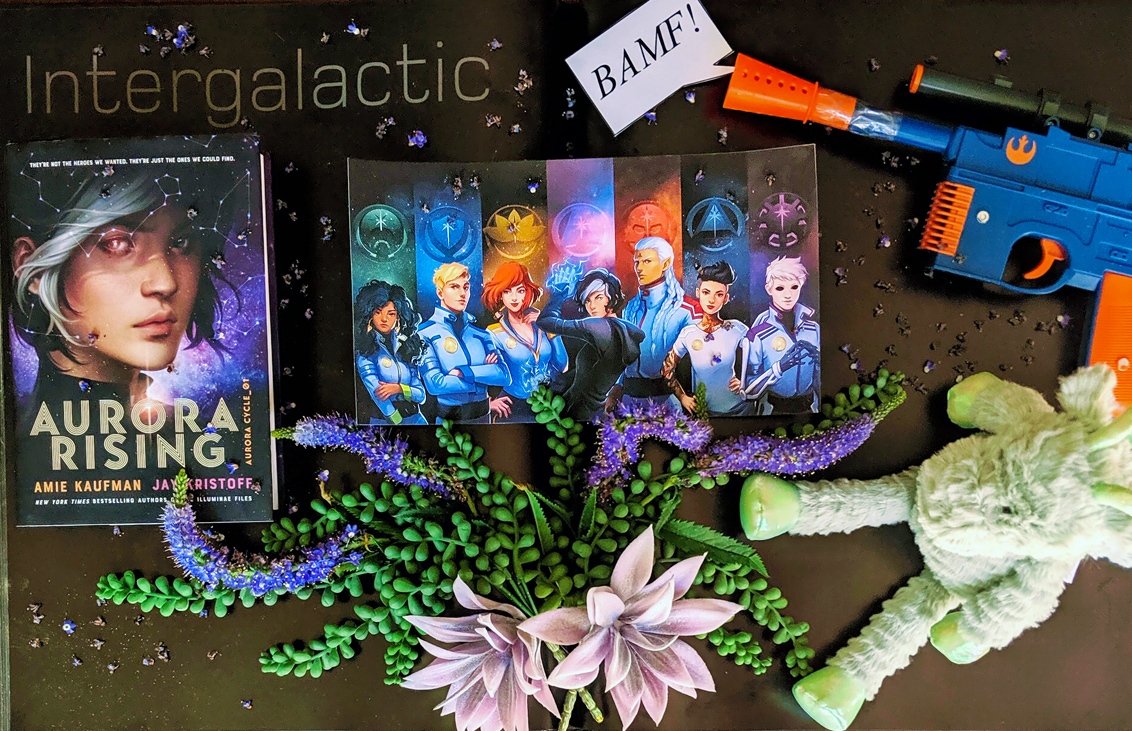 It’s 2380 and there are six kids whose dreams didn’t come true.

Imagine you’re one of the six eighteen year old kids graduating from Aurora Academy.  You’ve studied, trained, and worked your backside off in order to be the best of the best.  The Draft is here and all that hard work will finally pay off.

And, yes, along the way you may have received a few disciplinary citations (32 in the last two years, but who’s really keeping track) and gotten a little too trigger happy with your disruptor pistol (it WAS set on Stun). Or you’re in the top tenth percentile of smarts except for failing Fold Dynamics (clearly not your forte) otherwise you’d be genius status.   But there’s the huge drawback of having to wear an exosuit because of a nasty bug you caught as a kid, but still, genius status! OR you’re part of an alien species that just so happens to be the bringer of doom across the galaxy at the moment (no biggie though).

But let’s not think about all of that. No, let’s think on this moment, the Draft.   You’re looking sharp in your cadet uniform.  Your badge of your Stream gleams a bright golden sphere on your chest like a medallion.  In your eyes, hell, in the eyes of the Maker, you are top notch and anyone who is anyone should know that you deserve to be on the best crew.

The place is packed and everyone is anxiously waiting to find out who will be their next Alpha.   The moment finally comes and the first Squad Leader steps to the mic.  He looks over the crowd, his eyes solely focusing on those cadets he already knew he was going to choose, and glancing over anyone in between.  He calls out the names, one by one they gather together, except for two female cadets who decline his offer.  The Alpha looks pretty pissed about being snubbed, especially by the girl with all the ink.  Although grudgingly, he picks another Pilot and Diplomat and once his crew is complete, he steps down to a riot of cheers for the first official squad.

Then the rank and file really begins. Alphas take the stage one after the other, then another and another. Name after name, and as half the room is cleared, you begin to notice that sinking feeling as another Alpha steps up to the mic, saying a name that isn’t yours.  It’s when the last few names are called that the numbing feeling starts to really kick in.  There are no Alphas left.  The emptiness of the stage yawns out like the Void.

Once the realization of being the last kid without a crew sinks in, you look around at all the other rejects left in the room (except for the missing Alpha, he’s nowhere in sight).  As all the new squads make their way out of the room, taking the noise and excitement with them, no one bothers a sparing glance at the forsaken few who remain unclaimed.  You’re thinking the same thing everyone else is, but no one’s admitting it out loud, that this completely sucks.

They said they were the dregs of the draft.  The cast outs that no one wanted.  The last kids standing. But while these kids may seem like the worst case scenario of misfits and defects on paper, there’s certainly more to these characters than what we see on the surface.

Even though we don’t get to experience the actual Draft in Aurora Rising, we still feel that emotional punch to the gut when it’s brought up.  No one ever really focuses on being picked last.  When you’re part of a social gathering where people are being split up into teams, you build this thick mental callus over your thoughts, protecting yourself from the glaring possibility of being picked last.  You just don’t think about it.  And when it does happen, when your name gets called last, no matter how hard you try to save face, it still hurts.

What is so brilliant about Aurora Rising is Kaufman and Kristoff swan dive into the emotional and psychological complexities of the “cast-outs,” “losers,” “rejects,” etcetera and how that affects each character individually.  We experience in those first chapters each character’s mental status, their reaction to the Draft, and the people whom they now call their squad.  And it’s not easy.  Making sense of what happened, why it happened, it’s difficult to swallow, but surprisingly each character comes to terms with the hand their dealt (it may take a few of them half the novel to get there, but they do).

Aurora Rising is a fast pace thrill ride you don’t want to miss.  Kaufman and Kristoff are a brilliant team.  They meld together elements of fantasy, sci-fi, romance, and action as though they were the gods of forging, creating a story that is nothing but perfection.

In this series Kaufman and Kristoff use the traditional Point of View for each of their main characters. They all have something in common: sarcasm, smarts, strikingly good looks, and the last kids standing.  They’re each a different flavor.  Some you’ll love while others you may hate.  Feelings aside, once these flavors combine, you can’t help but want more.

Even though their situations move from, oh I’m going to soil my pants to I’m gonna need those spare pants now, Squad 312 is winging it like it’s a test they didn’t actually study for.  And after each near catastrophe they all seem to manage to pull it off and work together without getting themselves killed.

Kaufman and Kristoff have an incredible way of writing their stories.  The language is fresh, modern, and written as though you’re right there with the characters every step of the way.  You feel every emotion because it’s as personal as though you were having a conversation with your best friend, including all the social nuances.  And because of this, as the reader, you feel like you’re part of the team.

Not only is the fast pace exhilarating, it’s the captivating way Kaufman and Kristoff lead you into the story, firmly strapping you in for a ride in zero G’s with a fistful of turbulence that’s gonna make your head spin in a good way.  With delicious eye candy (pick a character, they’re all gorgeous) and moments of earth shattering romance, your heart may not be able to handle it (defibrillators are not included).  But it is soooooo worth the ride.

The characters are hands down what drives this story.  They are a force to be reckoned with.  What ties the characters and the story together is the idea that “you have to understand how important this is.” (18, Kaufman, Kristoff). Like the characters we’re reading about, we have these moments in our lives that stand out.  These crucial moments are part of our core memory, big or small, they matter.  They are important.  And throughout the novel we are reminded of this line over and over again in subtle, yet meaningful ways.  How with each leap these characters make both as individuals and together as a crew, those collective moments define the importance of how they will change everything from the dynamic of the squad to the entire galaxy.

Remember, this is important. 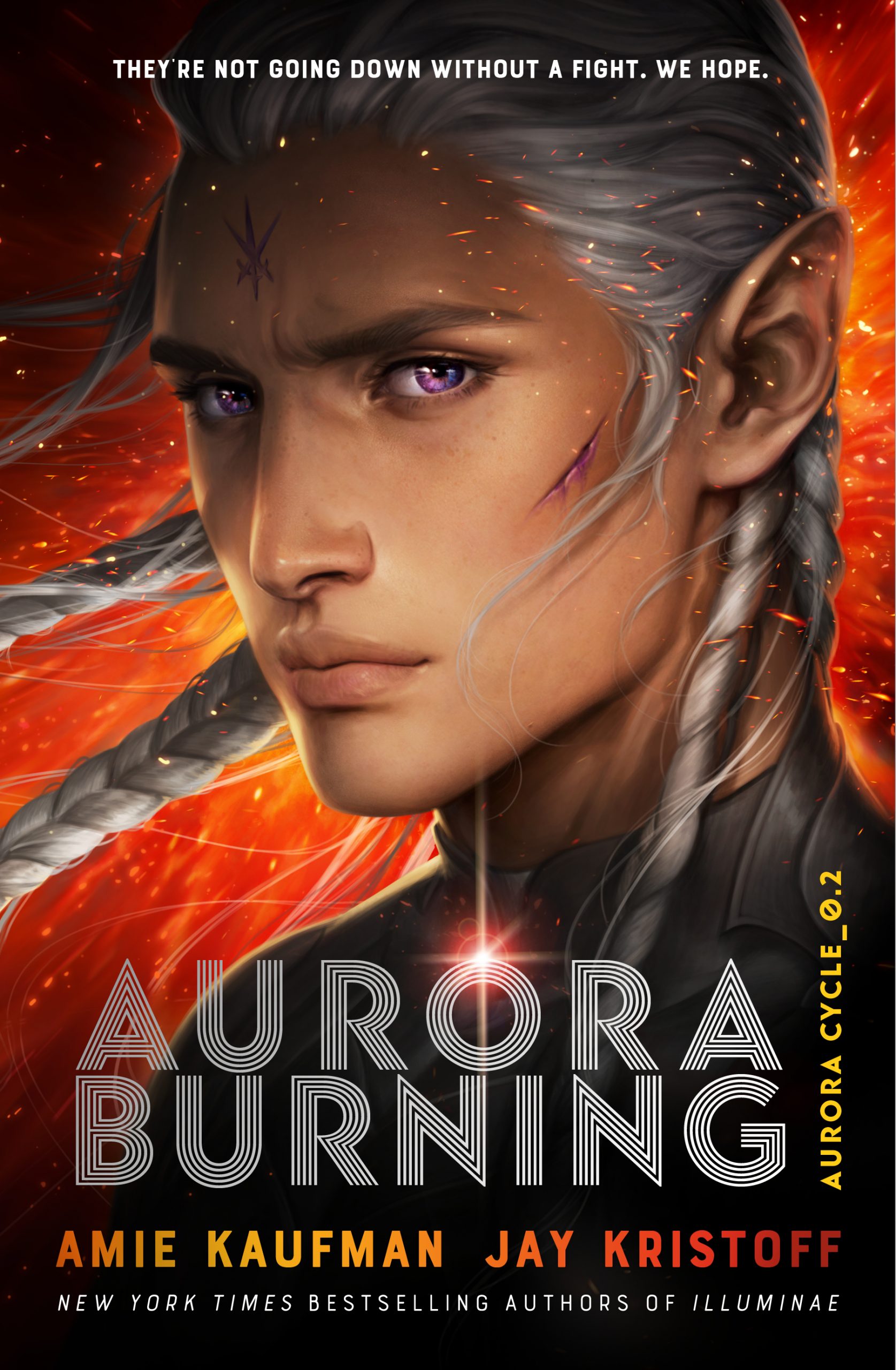