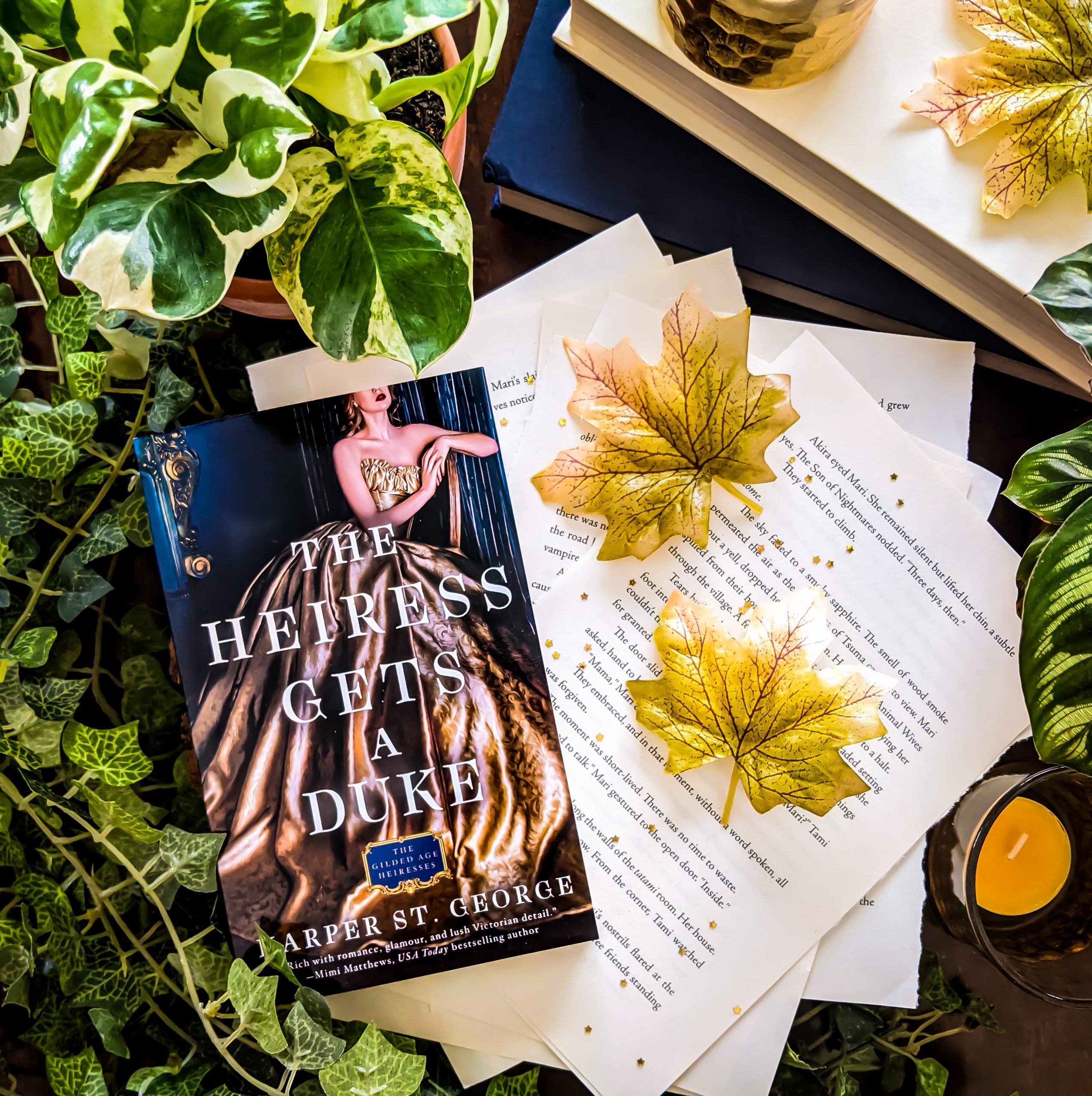 “The Heiress Gets a Duke is a romance novel that checks off all the right boxes for a deliciously romantic read.”

August Crenshaw may be an heiress, but she is unlike any of her peers.  With a breadth of knowledge for finance and management of a growing family business, Crenshaw Iron Works, August wants the freedom she sees the opposite sex gets without question: a place at the table that demands respect for their abilities to make decisions that benefit the business and thus see the end profits grow.

But these progressive qualities do not make for a “respectable” match between an heiress and a British noble.

And when the Crenshaw’s make their debut in high society London, they happen upon a Duke in need of a marriage that won’t leave him destitute.

Evan Sterling is the Duke of Rothchild.  Handsome, witty and a nobleman who doesn’t fit the typical mold of the aristocracy, is in no means wanting to get married.  But, with the decay of his families prospects, his father basically leaving them in financial ruin after his death, Evan has little choice, but to find a wealthy wife.

My Review: The Heiress Gets a Duke

Set in Victorian high society, August Crenshaw has zero interest in the high society of the British aristocrats.  Her ambition, rightfully so, lies in the expansion of her father’s company. To find new deals where she can help manage and represent the family business her grandfather created.

August’s character resembles a more modern day woman (although, even in 2021 we are still fighting for equality and against sexism) a woman having the right to her own body, mind, and workplace outside of the domestic, is refreshing.  It’s as though St. George flipped the roles. Showcasing a strong female woman, who demands to be seen as someone with a mind of her own and capabilities that society would usually only see fitting for a man.

She is not “mannish” as August is often referred to in the novel, but a woman who has feminist ideas.  That women deserve the right to vote, to their bodies, and be able to have a career as well as be a mother.  August is a brilliantly envisioned female character for an age that would see a woman as nothing more than a breeding mare.  She is according to the laws of the time, her husband’s property and could be dealt with as such.

Notably, August pushes back on this notion throughout the novel. She is not accustomed to the stringent social elite of Britain. It’s an interesting set up seeing the clash between high society of both countries (the US and Britain). Ultimately, August insists (as her privilege allows) that she will not fit the mold her parents and the British nobles would place restrain and keep her in.

Meanwhile, on the other side of the stage is Evan Sterling who isn’t anything like the Dukes we’re unaccustomed to seeing in the pages of historical romances.

He’s unique both in his characteristics and his Dukedom.  He is the penniless pauper whose only value is his title. Like a fresh breeze on a blazing day, Evan’s enlightenment of his depleting circumstances and his willingness to take responsibility is rare and commendable.

There are these poignant moments of his self-awareness of the situation where he’s willing to put in the work to try and make things right. Though Evan is still in the upper caste and can use his title to get him entry where others could not, the awareness that he’s not shirking his responsibilities is refreshing.

A Few Last Thoughts of The Heiress Gets A Duke

The Heiress Gets a Duke is sensuous, irresistible, and satisfying read.  You will be drawn in by Augusts open brazenness.   How she is the perfect pairing and foil to a bankrupt Duke.  In many ways their roles flip and August drives this point at every turn of the page.

Plus, the chemistry between these two is as good as your favorite dessert.  The ingredients are all perfectly measured and mixed. Creating a confection that has a delicious combination of romance and complex characters. Where August and in many ways Evan refuse the one-size-fits-all, society would like to forcibly keep them in.

If you love historical romance I definitely recommend this one!

And friends keep an eye out for a second novel.

The Devil and The Heiress, Harper St. George

Bringing Down the Duke, Evie Dunmore

A Rogue of One’s Own, Evie Dunmore