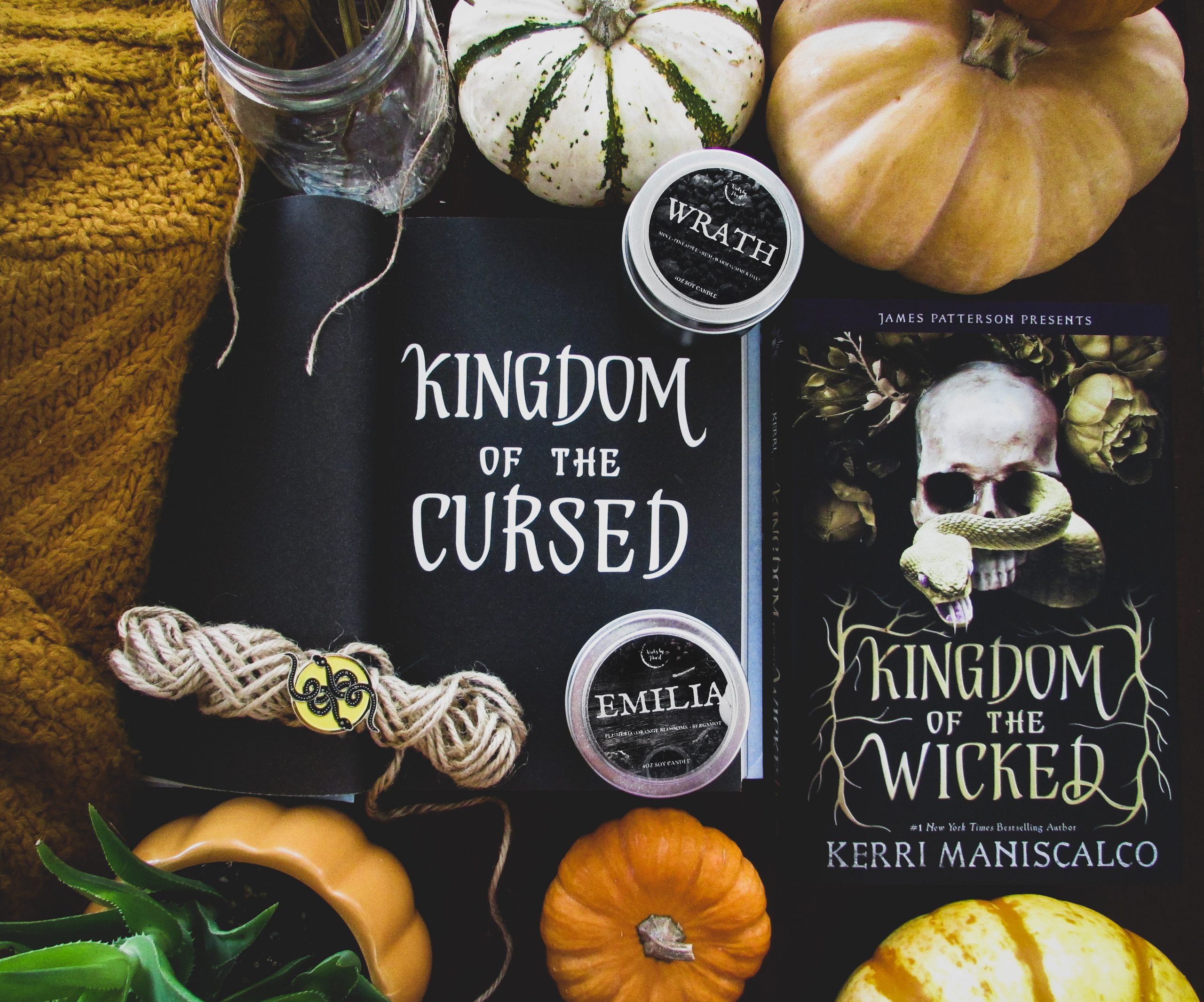 “Kingdom of the Cursed final chapters were the best part of the book. It gave me hope for an epic conclusion for the final book to this series.”

After selling her soul to become Queen of the Wicked, Emilia travels to the Seven Circles with the enigmatic Prince of Wrath, where she’s introduced to a seductive world of vice.

She vows to do whatever it takes to avenge her beloved sister, Vittoria… even if that means accepting the hand of the Prince of Pride, the king of demons.

The first rule in the court of the Wicked? Trust no one. With back-stabbing princes, luxurious palaces, mysterious party invitations, and conflicting clues about who really killed her twin, Emilia finds herself more alone than ever before. Can she even trust Wrath, her one-time ally in the mortal world… or is he keeping dangerous secrets about his true nature?

My rambling thoughts before reading: Kingdom of the Cursed

After reading Kingdom of the Wicked [KOW] I had some rambling thoughts:

So, in KOW did you notice Emila having some flashbacks that weren’t really explained?? I wondered about its relevance and how it would tie into the overarching story. Also, I wanted her to stop wanting to do things on her own and have more page time with Wrath. Did you feel that way? To see them build their relationship where they actually trust each other.

Who is he really? Yes, he’s one of the Seven Princes of Hell, but there’s just something about him that stands out. Plus, I really, really want his POV in Kingdom of the Cursed (we’ll discuss soon). AND what is his true name? (will Emila figure it out???).

Was it just me, or did anyone think at the end of KOW, is Vittoria already in Hell and will Emila find her?

There seemed to be more to it. Not just keeping the gates of hell closed, but that there was something else, like an onion, there’s layers to it.

Okay… Now that I got that out of the way let’s dive into my review. <SPOILER ALERT>

Come back after you’ve read the book.

My Reveiw: Kingdom of the Cursed

//Bangs head against the keyboard//

Was I frustrated with this book?

Okay, now my brain is processing and having an all out battle of how to rate this book.

I’ve had a few conversations about Kingdom of the Cursed with some friends and at first I was leaning towards three blots or stars because I do like this story. But, then I thought about the book as a whole and not just the last three chapters. And to borrow a phrase from another reviewer, although the quote is for a different book, I’m supplementing with KOC “I immensely enjoyed the ending of ‘Kingdom of the Cursed’, in fact, I pretty much devoured it. However, sometimes the story is only as strong as its opening as well as the vast majority of the book and this one was unfortunately off-key.” See Kate’s reviews for a great review of Portrait of a Scotsman.

How to describe this book?

It’s a mixed bag for me on this one friends. Kingdom of the Cursed felt like you were stuck in a room with someone scrolling through the endless array of content on Netflix, with no real interest in watching one thing long enough to make sense or to actually enjoy, until they fast forward to the very end.

Does that make sense?

Looking back to the first book we have a sound premise. Emilia’s sister is murdered she seeks justice/revenge. We leap from page to page in this feverish dance of good story telling with a sprinkling in of yummy witty banter and budding potential romance.

Sadly, this book doesn’t have the same feel. And perhaps that’s what Maniscalco was aiming for: the reader to be in this perpetual haze of confusion as Emilia turns into something unrecognizable. As though her drive and purpose pewters out like a candle the moment she steps into hell.

And, speaking of Emilia’s major character 180◦ Maniscalco’s hones in on more of Emilia’s sexuality and desires over the reasoning of why she sold her soul to the devil in the first place. Because through most of the novel she’s all consumed by having her way with Wrath.

Which is a perfect segue into the uptick in the steamy romance. To put it bluntly there is a lot more sex in this book. It’s definitely a New Adult novel where Emilia is literally figuring out what she desires and wants. Here I’m going to deviate a bit and make a comparison between Maniscalco’s novel and Sarah J. Maas’ A Court of Thorns and Roses series.

As I mentioned in my review of A Court of Silver Flames, there was way to much focus on sex. It was a bit much. Like most readers, I want Emilia and Wrath to have sex and desire each other, but at the same time I loved how Maniscalco wrote these two into existence in the first book. I valued what Wrath was offering and essentially became for Emilia. He gave her for the most part a choice and subsequently an opportunity to start trusting him and each other in order to form an alliance.

Now you might be wondering… Did Cece just make a heading for an entire chapter???

I did, and here are the questions I had after reading said chapter:

Any way I look at this chapter it stands out like a Pollock painting, but not in a good way.

And I get it, this is Hell.

But here’s the thing, Wrath for the most part has been portrayed as this morally gray-ish character, who is charming, nice to look at, and seems to have a pretty good moral compass. I actually like him more than Emilia. But, that all changes in Chapter 17.

There’s so many reasons why this chapter is NOT needed. Specifically, because Wrath makes it abundantly clear from the very beginning the do’s and don’ts when it comes to Emelia. So to have this chapter makes no sense. I’m not going to go into detail about what Maniscalco wrote, because you’ll have that feeling of being violated and want to take a shower or try somehow to erase it from your permanent memory storage.

As I said before, there was such a focus on Emilia and her sexual desires that I wondered if Maniscalco would ever get back to the point of Emilia’s end game.

Why she sold her soul.

And I know characters go through major changes during stories, but it felt like I was reading a completely different character. Someone who was unsure of themselves, who couldn’t bother to take a moment to communicate with anyone, let alone Wrath, because had she done that, the first 3/4 of the book would have been completely different.

Also, what happened to Emilia’s love of cooking? This was something I absolutely LOVED in the first book. Cooking was her escape. It is Emilia’s joy and in some ways self-care. It grounded her, giving her a sense of self, joy, solace, and purpose. Creating food to fill someone’s hungry belly and watch them devour it whole seemed to give her a sense of pride in what was consumed. In Kingdom of the Cursed, cooking felt more like an afterthought when she finally made it into Wrath’s kitchens. And in the scene when she’s in the kitchen, though sweet, and gives readers reminiscence of the first book, it wasn’t really elaborated upon. Which, again to me was a lost opportunity. Although there is a sweet scene in the kitchen between Emilia and Wrath as he puts together a cheese plate. Definitely an awwww moment.

Further, I think Maniscalco’s skill in writing sound detective story telling is her strength. You see that in her debut series and subsequently crafted those same elements and concepts into this series as well. Though it was rather lack luster in this book, which was disappointing.

As for the ending…

To wrap it all up: start at chapter thirty-two, remove chapter 17 (don’t read it or literally tear it out of the book, I leave it to your discretion), and you’ve got a 5 star read.

Those last chapters were what I came to the table for to devour. Why I bought two different editions of this book. If Maniscalco had used the ending as her springboard for the beginning of the book it may have turned out like this:

Okay, Time TO Really Wrap It UP

I am anxious for the next book. That ending gave me hope. Fingers crossed the third book will be back on track. Would love to see more of the world-building and get some more time traversing the map of Hell. Plus, I’d love to see the other Princes interact with Emilia and Wrath. To see if they’ll all be willing to work together towards one goal before returning to their own vices.

We’ll have to wait and see.

Photo Collage Kingdom of the Cursed

Favorite Quotes from Kingdom of the Cursed

“Not all stories end happily, Emilia”

“And there is nothing more dangerous than love, is there? People fight for it. They die for it. They commit acts of war and treason and all manner of sin in its name.“

“When the demon responsible for Vittoria’s death finally felt the flames of my fury, I’d hopefully have burned this House of Sin to ash.“

“Some truths do not grant the freedom you seek. Once known you can’t ever go back. Choose wisely. – S“

“ ‘Don’t answer now, but I want to know if what you said then stands.’ ‘You’ll have to be more specific. I said a great many things.’ ‘If I am still yours.’ He stilled. My words hung between us, heavy and lingering. Like his gaze.”

Sheaf & Ink has reviewed a number of Young and New Adult novels in fantasy like Kingdom of the Cursed. Read Kingdom of the Wicked and A Court of Silver Flames reviews to find your next favorite book and join the conversation. We love hearing from you. 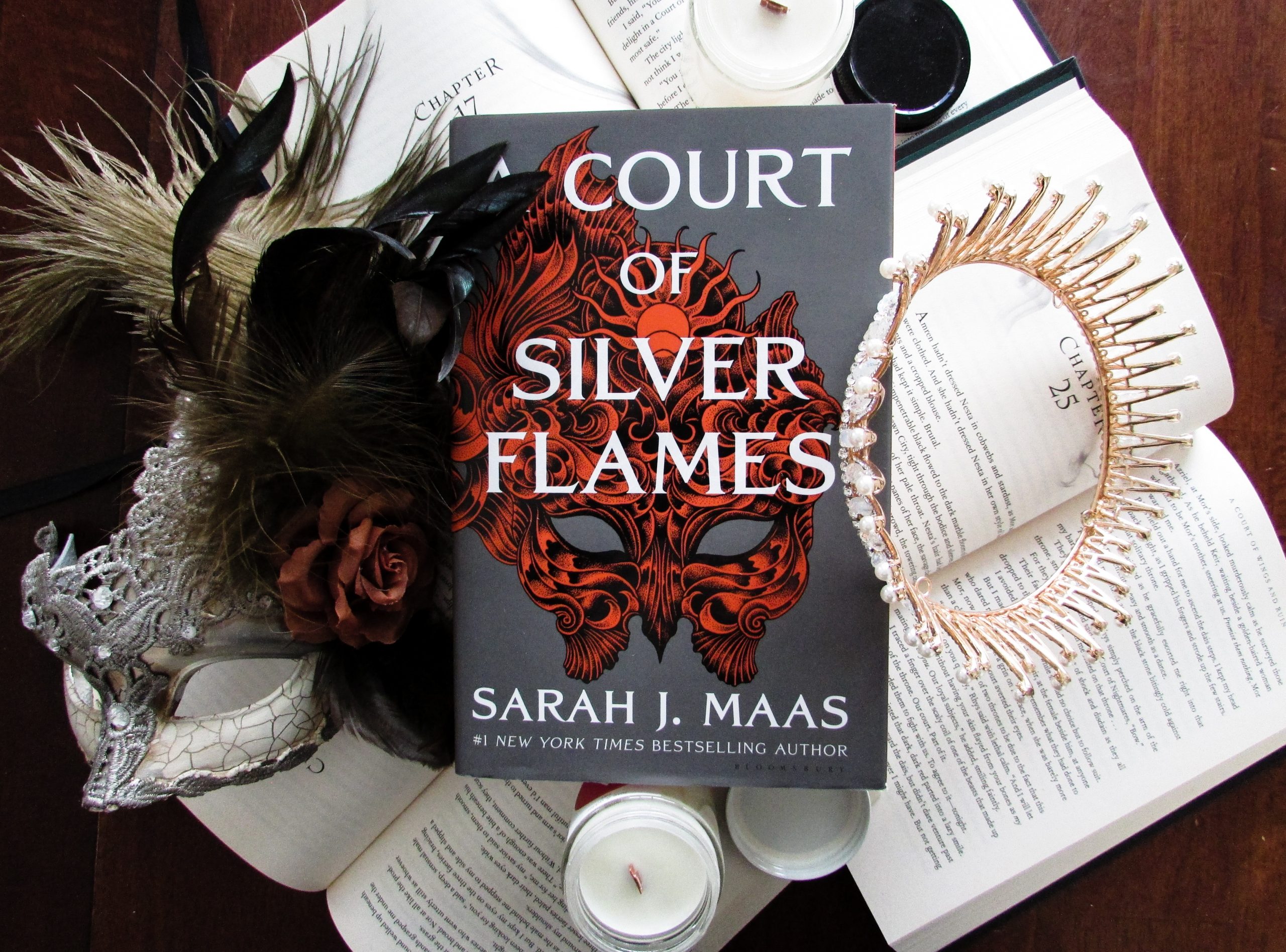 📚Have you read Kingdom of the Cursed?