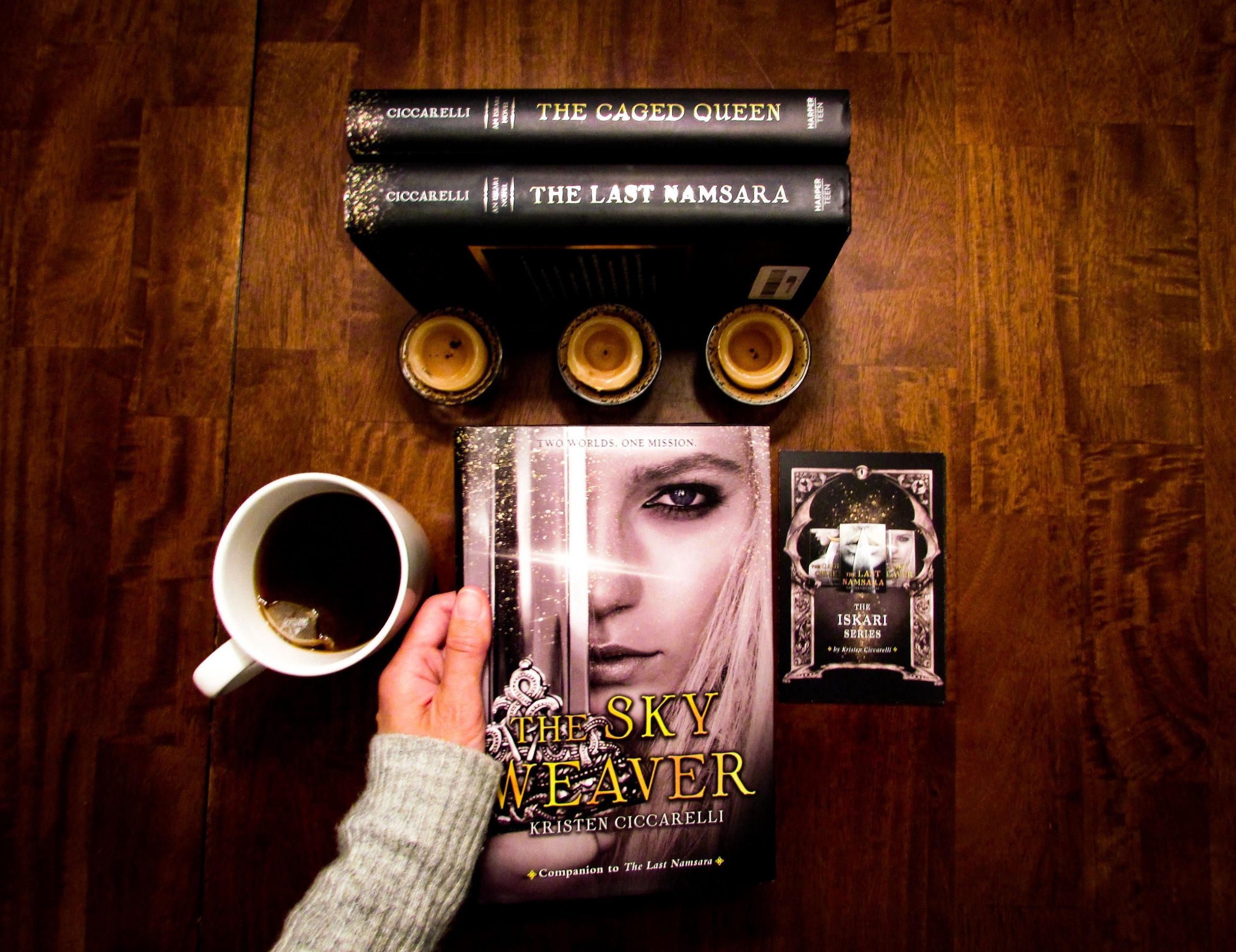 A thief and a soldier

A god and a girl

Two stories weaved together from shadow and sky forged with blood and steel.

Welcome to the Sky Weaver

Following The Last Namsara and The Caged Queen, this third companion novel in the Iskari Series we are swept away to another portion of author Kristen Ciccarelli’s alluring world, focusing on two characters: one new, a pirate and a thief, and one we’ve known since the first novel, whose fiery courage and cunning has her as the leader of Firgaard’s armed forces and personal guard.

Safire, the commandant, is a young woman whose voice brokers no room for argument.  She is fierce and brave, commanding her cousin’s army and personal guard with a vigor that can match no other.  She knows her role and plays it well.  Serving the king of Firgaard, she is more than just a soldier, but also his confidant, his closest advisor, and most importantly, his family and friend.  Safire would do anything for her family in order to keep them safe.

Then there’s Eris.  A golden haired, blue eyed thief who hates soldiers.  She’s a pirate with no scruples and yet, she is more than what she seems.  With an ability to move be3tween worlds, Eris can escape any and all those who may hunt her.  She’s earned the name of the notorious Death Dancer and feared by those who are unlucky enough to cross her path.

But as fate has it, Safire and Eris paths cross and entangle tightly into complex knots that may become more and more difficult to undo.  After meeting Eris, Safire begins to question everything, including herself, not knowing who to trust or believe.  And as we race across the map of this magical world Safire and Eris may despise each other, but they have one mission, one goal: to find the last Namsara.

Not only do we follow Eris and Safire, both fierce female characters, at odds with each other, even though, secretly, you wish they weren’t, but also the story of the Sky Weaver herself.  Entwined between Eris and Safire’s story, in threads of gold and shadow, is the lore behind the immortal Sky Weaver: her origin story.

During these interludes, I found myself drawn to the storytelling.  It held its own magic, casting a spell that I didn’t want to break.  Where we are shown glimpses of Skye and her interactions with the god of Shadows.  It’s a touching story, heartbreaking too, one that reveals the beauty in inner-strength, courage, and love.  Moreover it reveals how the Sky Weaver’s story is woven tightly together with Safire’s and Eris’.

Kristen Ciccarelli’s third novel is a bright and brilliant conclusion in her Last Namsara series. It evokes themes and literary tropes that readers can all relate to and thoroughly enjoy.   Ciccarelli’s lovely prose and storytelling has these moments in the novel where you pause and relish what was just read.

The Sky Weaver was a feast of a book.  Once the story ended I only craved more.

Sky in the Deep, Adrienne Young

Frankly In Love by David Yoon